Hungama 2 Review: A poster of the film (courtesy priyadarshan.official)

Paresh Rawal, Tiku Talsania, Manoj Joshi and Rajpal Yadav return to the mad, mad world that Priyadarshan had conjured up in Hungama in this unsolicited follow-up to the 2003 comedy. With several new additions to the cast for company, the aforementioned actors and their director attempt to turn the clock back. They come a cropper.

Hungama 2, streaming on Disney+Hotstar, has come nearly two decades too late. Its flimsy formulations have gone so fusty that they disintegrate quickly, leaving a trail of frivolities behind. Priyadarshan was once feted for the controlled lunacy of his comedies. Here, the lunacy is intact. Control is conspicuous by its absence.

The gags Hungama 2 weaves around a disciplinarian dad who brooks no nonsense, a jealous husband who makes a fool of himself and a young woman who arrives one fine morning with a child looking for the baby’s alleged father are uninspired, slapdash and unfunny, apart from being totally out of sync with the times.

A woman with a baby in search of a father in a household lorded over by a hard taskmaster is a such a last-millennium plot device that the sorry spectacle of people going into a tizzy and running riot as a result of the mother’s claims is more laughable than sidesplitting.

Since this is a Priyadarshan comedy, you half expect it be rounded off with a hysterical chase scene involving all the key characters. Hungama 2 proffers only a teaser of what could have been an uproarious free-for-all of the kind that we saw all those years ago in Hungama, Hulchul and Bhaagam Bhaag. It ends abruptly, leaving Rajpal Yadav hanging in mid-air in a freeze frame, before veering into a wedding where all hell does not quite break loose.

If a dangling, motionless comic actor doesn’t sum up Hungama 2, nothing will. With both its feet planted firmly in the past, the film wants to be a laugh riot. And that turns out of the biggest joke.

Colonel Kapoor (Ashutosh Rana) is a retired jail superintendent who hasn’t yet shed his prison warden persona. His younger son Akash (Meezaan Jaaferi) is all set to marry the daughter of his father’s best friend Bajaj (Manoj Joshi). The preparations for the wedding are thrown into disarray when a girl named Vaani (Pranitha Subhash) lands up at the bungalow with a pretty little daughter and claims Akash is the father of the child.

That is the loop that Hungama 2 remains trapped in for its remaining two hours. Kapoor believes the girl and puts the onus on Akash to prove that he did not go the whole hog with Vaani during their relationship in college. The dice is loaded against the guy.

The film strives very hard to sound contemporary – words and expressions like “aatankwaadi” (in the context of the mischievous children of Kapoor’s elder son), “ghuspaithi” (a reference to Vaani) and “baat virus ki tarah phail jayegi“. At heart, however, Hungama 2 is more at ease with its tight embrace of the trite. 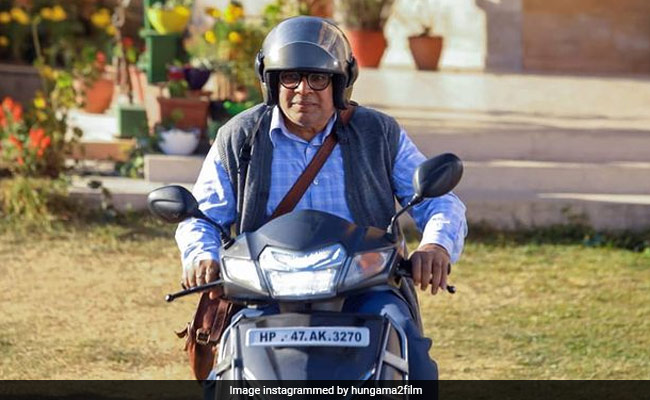 Hungama 2 Review: A still from the movie

At the core of the sloppy comedy is a notion that no longer holds water – when a film does not have substance, pack it with madcap characters and weird sub-plots to liven things up. Nothing can be worse news than a comedy that is need of comic relief.

Hungama 2 banks principally on Paresh Rawal to inject life into the proceedings in the guise of a lawyer who suspects his wife Anjali (Shilpa Shetty, making a big-screen comeback after a 14-year break) of having an affair with a younger man.

Do not ask what Anjali does for a living. It is suggested in passing that she is Akash Kapoor’s personal secretary but we have no way of vouching for that because neither of them is ever shown engaged in any kind of gainful, recognisable employment.

Not that Radheshyam Tiwari the advocate does anything either barring placing a spy camera at the entrance of his home in order to keep an eye on Anjali’s movements. His anger isn’t directed so much at his attractive partner as at the men he suspects. He chases them around town on his scooter. When he thinks he has caught the culprit red-handed, he sets off a chain of events that are funny for the wrong reasons.

For the key characters, nothing goes as planned. The patriarch, a stickler for form, struggles to hide Vaani from Bajaj, Akash’s would-be pa-in-law. Akash tries every trick in the book – of course, we are talking a book that lost its relevance many years ago – to prove that he isn’t the father of Vaani’s child.

When all else fails, Akash ropes in the family factotum Nandan (Tiku Talsania) and a college canteen manager Popat (Rajpal Yadav) to help him find a way out of the mess he is in. But everything he does backfires and lands him in bigger trouble.

Isn’t that what comedies are about – people fumbling and faltering as they seek to get things in order? To that extent, Hungama 2 has all the necessary pieces in place. Only, they are all frayed at the edges and the jigsaw that they are a part of is such a puerile mess that none of the high-spirited antics of Kapoor, Bajaj and Tiwari can salvage it. 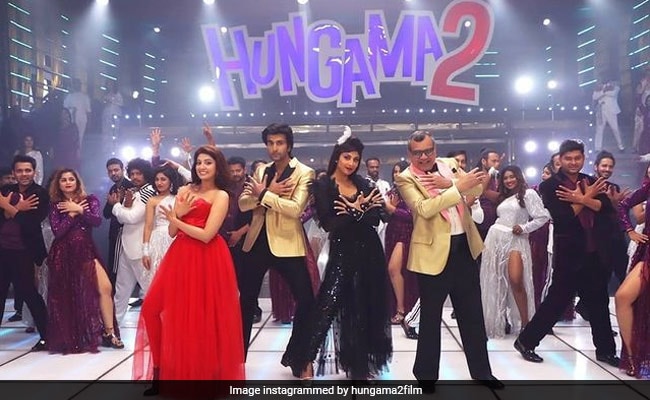 Hungama 2 Review: A still from the movie

Hungama 2 is the sort of film that render the performances irrelevant. This is despite the fact that the cast has several actors with proven mastery over comic timing. Suffice it to say that the film itself isn’t timed right. Let us not expect the actors – who throw the entire caboodle into the mix, from unabashed buffoonery and hamming at one end to romance and emotions at the other – to rise above the material.

One feels sorry for the young leads. Neither Meezan Jaffrey nor Pranitha Subhash are out of their depth, but they are hopelessly hobbled by a screenplay that gives them no support at all.

A remix of the mid-1990s number Chura Ke Dil Mera Goriya Chali (featuring Shilpa Shetty, who also was in the original Main Khiladi Tu Anadi song) isn’t the only throwback in Hungama 2. The film is strewn with other references to Bollywood movies and lines of dialogue of the past.

It stages a song-and-dance interlude (performed by the two leads) that seeks to echo Sridevi’s Kaate Nahi Katati Din Yeh Raat and Madhuri Dixit’s Dil Dhak Dhak Karne Laga. It also creates space for a cameo for Hungama lead actor Akshaye Khanna. Needless to say, the retro elements are a complete waste, as pointless as the film itself.

Woman hit by DUI driver, has credit card stolen while recovering in hospital